Who was John Stuart Mill? 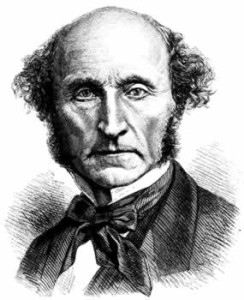 John Stuart Mill is definitely one of the greatest thinkers that Great Britain is proud of, totally changing the general ideology, to provide a more realistic and adapted to society new perspective. He was a prominent utilitarianism and liberalism member far ahead of his time, by supporting women’s emancipation, equal rights and even animal rights. Although much of his work was written in the mid 1800s, it continues to be intensively studied, precisely for Mill’s visionary.

John Stuart Mill was born in 1806, in the London area, in a wealthy and influential family, who fervently wanted their heir to follow a remarkable path in life. Since the infancy, he was directed towards permanent study in various fields, his precocity helping him cope for a while. When he was only a few years old, he was already able to read Aesop’s works in original, classic languages being one of the main approached topics. He went to prestigious schools in France and England, studying various fields, from economics and classical languages to zoology. At age 20 he suffered a nervous breakdown, due to the continuous effort, from his writings resulting a rather critical attitude towards this education system, which basically deprives children and young people from age-specific occupations.

Choosing a career in the East India Company instead of additional studies at universities such as Oxford, which would be welcomed him with open arms, he will be forming new views on life. John Stuart Mill will also begin to be intellectually noticed, being elected member of several prestigious institutions. He will also be elected member of Parliament between 1865-1868, where he associated with the Liberal Party, which was the closest to his system of thinking. Unfortunately, English liberalism of that time was only a drop shadow of what visionary Mill already had in mind.

Regarding his activity and especially his work, the most important creations that stand among the works of that time are “On Liberty” and “Utilitarianism”, in both proving a free (liberal) and well argumented thinking. Even today, these books would be as actual and well received. Since an early age, John Stuart Mill was heavily influenced by the thinking of his father, a declared utilitarian, disciple of Jeremy Bentham, founder of this trend. In his oppinion, resources should be invested in a state (country) so as to provide the greatest happiness of most people, creating even a mathematical formula in this regard. Later, he will be criticized as just a bureaucrat who sees the world as numbers.

But in that time, everyone was expecting the young Mill to become a fervent adept of this system, just like his father. Although he tried, as far as possible, to remain true to his father and Bentham, he will radically change the utilitarianism, adapting it to the society. Thus, he will classify the pleasures, dividing them into two categories: physical and spiritual the pleasures, thing undone by his predecessors. John Stuart Mill wanted to introduce the quality level into utilitarianism, completely omitted before. Thus, spiritual pleasures are superior to physical pleasures, even if they are difficult to reach. However, they should not be neglected but equally provided to those who need them, and we also need people to educate us in this regard, to not plunge into mediocrity an entire country. Gambling would probably attract more people than opera. But it doesn’t mean that gambling must be preferred over opera when it comes to resources allocation.

In the freedom field, John Stuart Mill really brought a new perspective to the political world of that time. The thinker was afraid of the dictatorship of the majority, which will tyrannize the few with different opinions or lifestyle. So, the freedom only extends to the limit when it hurts someone else, without being unlimited. But in terms of self, everyone is a total sovereign. That’s why Mill has always supported cessation of slavery, counteracting the oppinions according to which the slaves were inferior beings in need of care and supervision and who were thus obliged to obey their superiors, the white people. Another extremely important aspect of Mill’s thinking is linked to freedom of expression / speech, the thinker always being against any kind of censorship.

John Stuart Mill astonished by being the first member of the British Parliament to ask women’s right to vote. Married to Harriet Taylor, an intelligent and capable woman, Mill understood the necessity of integration of women in all the levels of life, as they weren’t those helpless and without political interest beings described everywhere. Although it will take a while until his dream will come true, Mill created the necessary precedent to support this fundamental right. And from here, there was only one step.